‘Piper’s Medley’ is a multifigured composition about connectivity and disconnection.

My professor Tom Lapierre used to say “Everything happens at once”, and as I’ve matured I understand exactly what he meant. With things such as disaster, pleasures, aging, obliviousness, service, folly, diversion, division, disparity, and consumerism all a part of the human condition, somehow the madness of man-made systems continues to function. It is said that to maintain our sanity and hope, we have to tolerate cognitive dissonance, to fiddle as we burn Rome ourselves, or somehow make adaptations as we understand more. Maybe things are not bleak, maybe everything is a gift.  Perception is everything. My wish is that as humans  “We got this”.

‘Piper’s Medley’ is a large compositional painting. It evolved from sketches and thoughts about different perceptions of reality, mixing anxiety and humour, and juxtaposes elements that aren’t often painted let alone portrayed together. This includes a servant, a sleepwalker, an aging man, a nurse, a great ‘machination’ trampling the naked masses, a natural disaster displayed on the horizon, a jogger, a loving orgy, a person protectively walling himself in, a buxom young ‘Kardashian-esque’ shopping lady, a contented ‘bin diver with bottles, and a bleary-eyed ear-plugged bagpiper playing a weary song. Each character or grouping of characters is in their own headspace or ‘bubble’ as it is now so often referred to. I had fun with proportions and distortions for psychological effect, composing the image to lead the viewer’s eye around the canvas, and took pleasure in getting the colour and lighting just right.

I often get the feeling that something has been silenced in the contemporary art world. In recent a conversation with a friend, we were discussing how artists, art fairs, galleries, and museums have to ‘play it safe’, dealing with art as wallpaper,  decor in a million varieties. Somehow meaningful content went by the wayside as commerce took over from storytelling. We are offered dazzle or blandness. There are now balloon dogs, polka dot paintings, and oversized chia pets to coax one into thinking everything is alright. Artists are to present themselves as recognizable brands instead of as lateral thinkers. Soma for the masses has replaced philosophical inquiry, rational thinking, social commentary, and social and spiritual interests. William Hogarth, the great satirist and painter, had similar feelings a couple of centuries ago.  He created a wide variety of images that can be relatable to political, social, and economic challenges playing out at the current moment. Maybe it’s the nature, privilege, and obligation of the artist to be consumed by the world, to create images that find truth in the nature of life while irrespective of their time in history.

I note that when people have seen this painting there is a quiet awareness to the erotic grouping in the top corner and some are a bit taken aback with that part of the image, which in a sense acts as a distraction from other content in the painting.  Like in our culture we are distracted by sport, tripe entertainment and the like. And people are almost conditioned to be shocked.  Part of my five years of art schooling was spending a year in Florence, Italy.  I was initially bewildered that hell was portrayed as ‘sodomite punishment’  type scenes such as in Vasari’s hell scene on judgement day at the bottom ring of figures on the Duomo ceiling. Somehow the carnal experiencing of the human body is shunned, filled with shame and torture. I wanted to remove the absurd attachment of hell and sin and guilt and shame this part of the painting, as i think something along the lines of Bosch’s ‘garden of earthly delights is  more in line with the reality of experiencing the flesh of our being, as pleasure and enjoyment of the earthly realm.  And so i took the opportunity to painted a loving little fantasy corner. removing the aggression and nastiness that is sometimes the dark side of the internet.

The greenish gold trampling machine, with ‘I-pod’ smooth forms, also has horses hooves, to represent what Carl Jung might call the ‘life force’, an energy always propelling things forward, and not within our control… The brightest chroma element of ‘Piper’s Medley’ are the ‘neon sticker’ lips, which along with the elegant purple spikes, allow the metallic beast to present itself as something that it’s not.  In the modern world we would see this as a good PR tactic to distract and veil its destructive nature. “You can put lipstick on a pig, but it is still a pig.”

The painting contains environmental, industrial, social, sexual, hierarchical and psychological elements and acknowledges economic disparity. Somehow the social structures and systems in place are bigger than any one person, and that we are all just party to them.

Just like the great artists whose work I have admired over the years i wanted to contribute with making art that gives one content to reflect on.

I wanted this painting to be a personal letter of hope and my contribution to meaningful content ready for discussion. Some of my favourite works are large multi-figured paintings by artists like Max Beckmann, Peter Breughel, Stanley Spencer, and George Tooker, all great figurative artists. I was also inspired by the idyllic painting called ‘The Golden Age’, painted in 1862 by Ingres. I originally thought of giving my painting the title, ‘After the Golden Age’.

One of the central characters is the beast who stomps along with a child’s sticker-book neon smile, and as I conceived the painting I wondered “does he not know what he is doing”, or “does he know and carries on anyway?”  I think the grotesqueness of the beast is gently portrayed but the questioning message is still strong.

“Maybe there is a beast… Maybe it’s only us.” William Golding, Lord of the Flies.

Art has a relevance to the soul, nourishing thought, and feeling the way food nourishes the body. 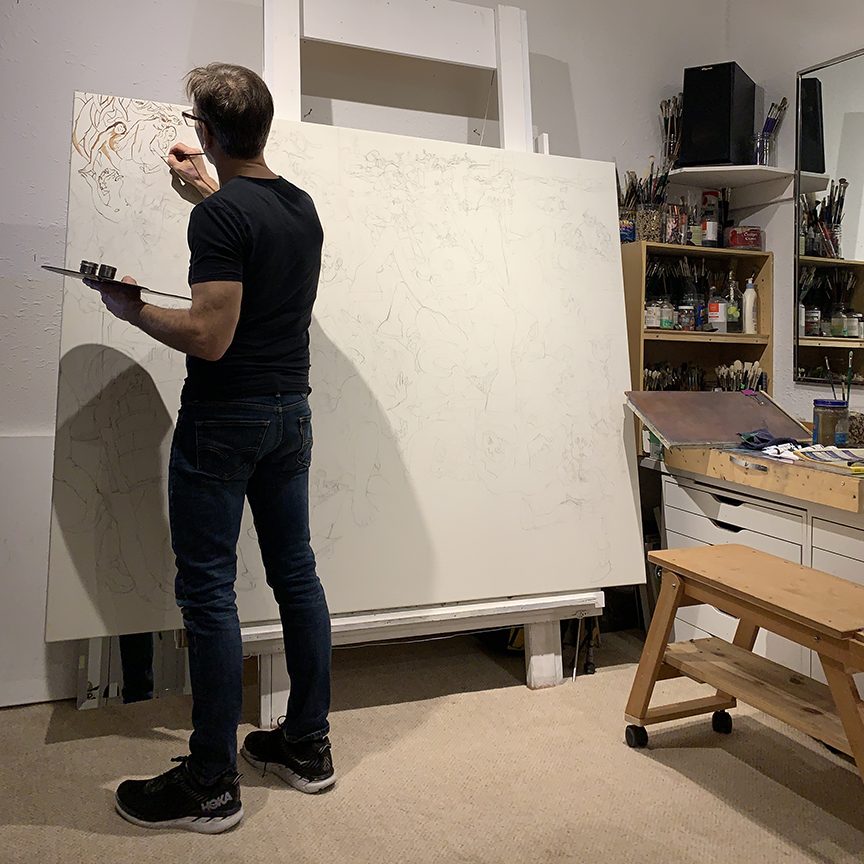 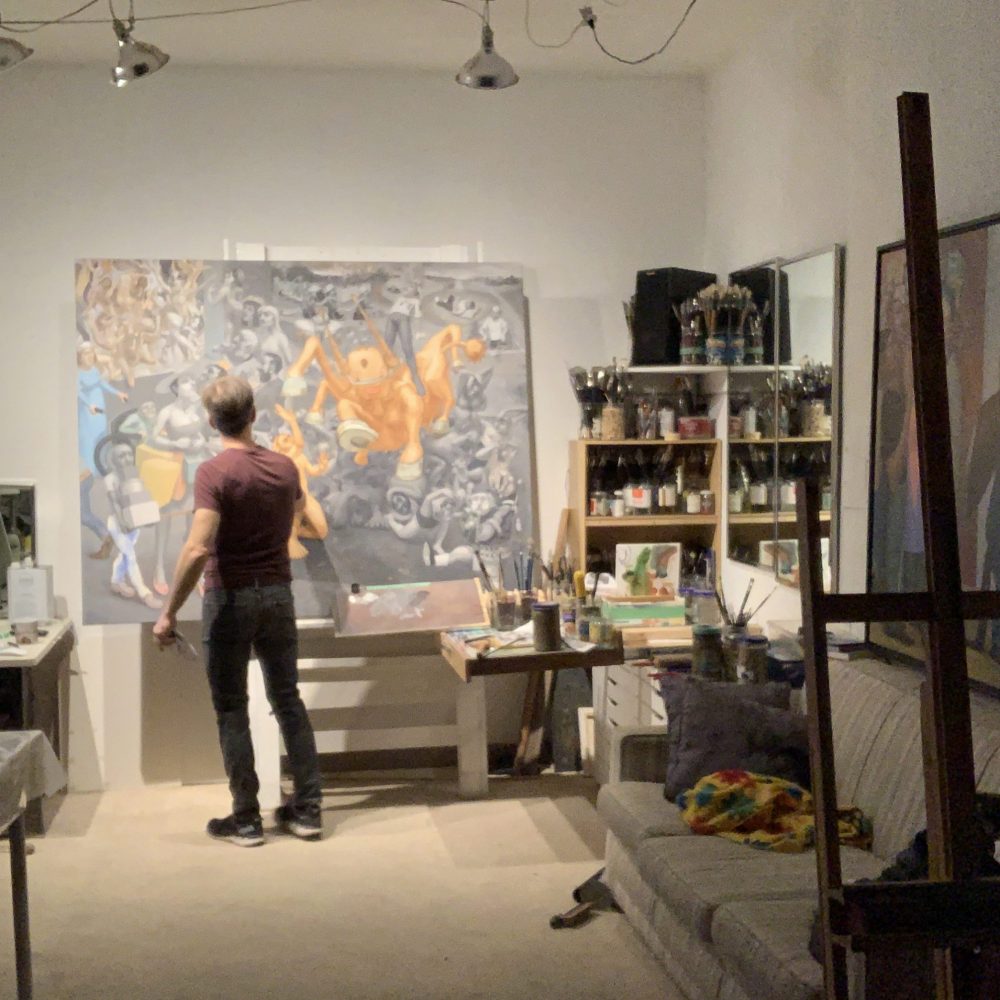 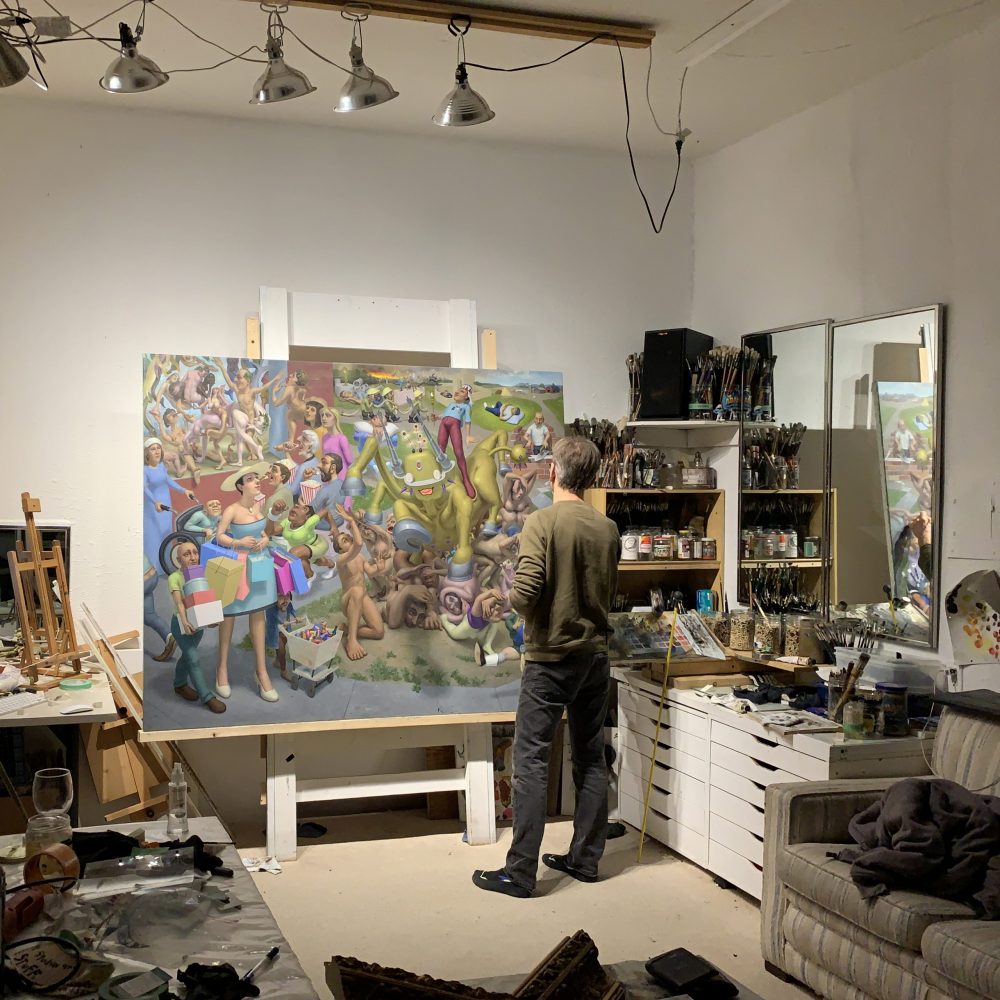 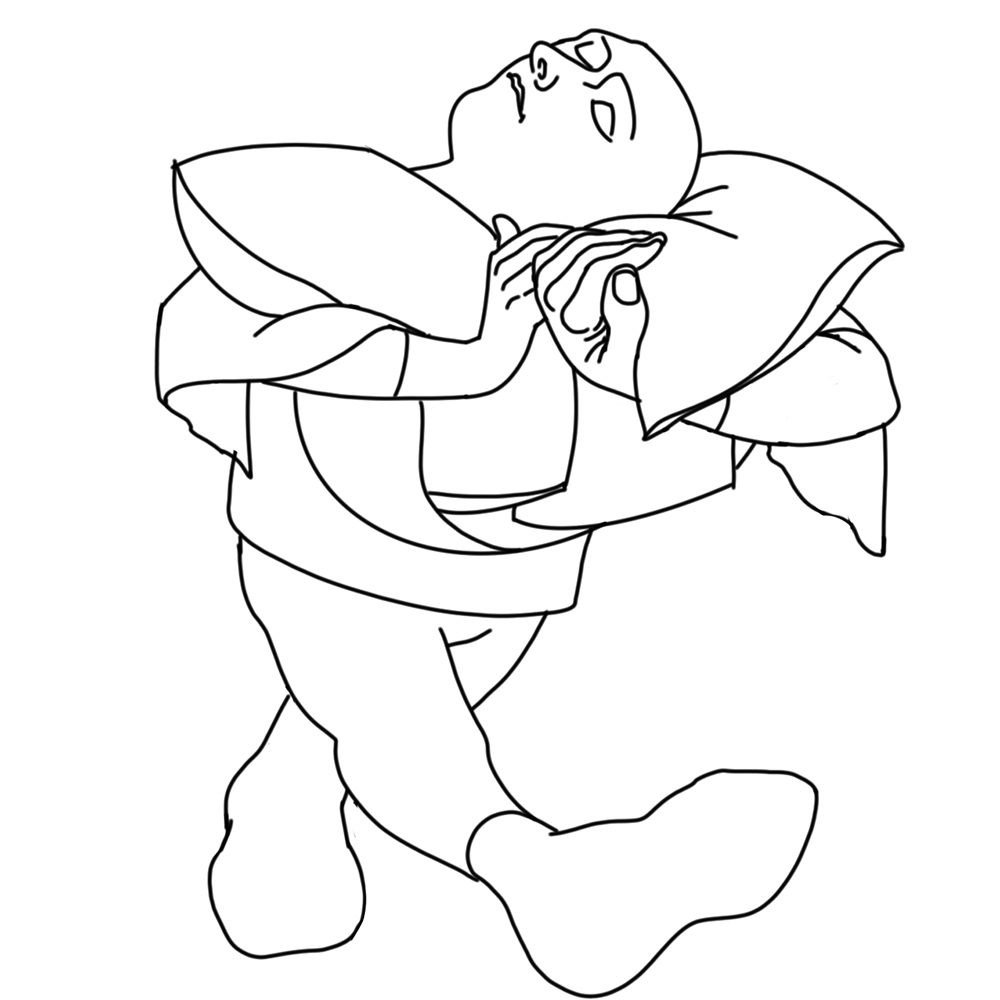 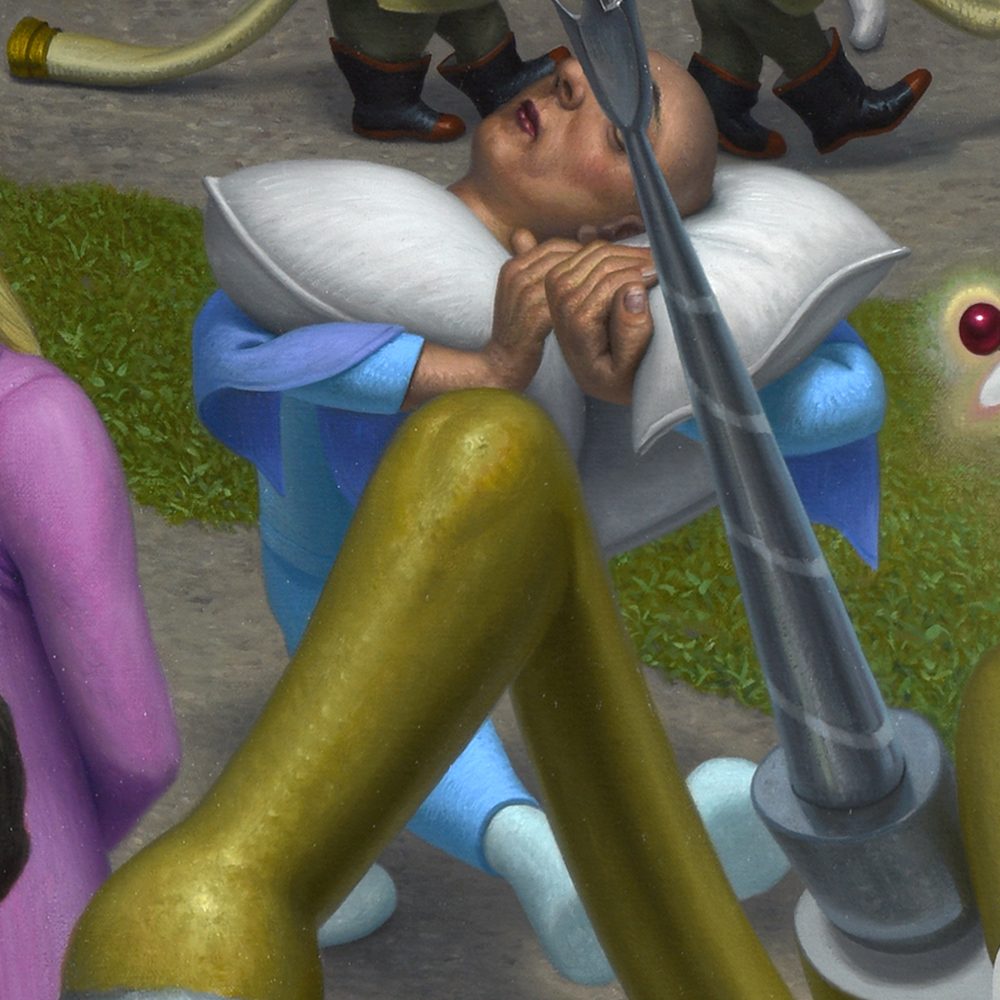 After a month of drawing and four months of painting, the canvas was then left to dry for three months. And so now it’s varnishing day, one of my favourite days in the studio! The studio is lit up brightly to be able to see everything while varnishing, to make sure there is no dust or loose bristles. Oil paint dries to a dull lustre, so one varnishes to bring the colour back to life and protect the painting. You’ll see in the video how varnish changes the richness and saturation of oil paint, bringing the colour back to what it looked like when initially painted.